Eevery healthcare professional has a big dream: to have one omnipotent instrument  that can diagnose and analyse every disease. It even appeared as the medical tricorder in Star Trek. When Dr. McCoy scanned a patient with his tricorder, the portable, hand–held device immediately displayed vital signs, other parameters, and a diagnosis.

With the exponential advancement of healthcare technology, we now live in a world where similar devices that were once a figment of sci-fi enthusiasts' imaginations are now a reality! The Viatom CheckMe Pro is a palm-sized device that can measure ECG, heart rate, oxygen saturation, temperature, blood pressure, and other parameters. Other companies are also working on similar devices, such as the MedWand, which, in addition to measuring multiple vital parameters, includes a camera for telemedical purposes. Then there's BioIntelliSense's FDA-cleared BioSticker, which, despite its small size and thinness, can measure a variety of parameters such as respiratory rate, heart rate, skin temperature, body position, activity levels, sleep status, gait, and more.

Although the products currently on the market are a long way from the tricorder, we will get there soon. High–power microscopes with smartphones, for example, will be used to analyse swab samples and photos of skin lesions. Sensors could detect DNA errors as well as antibodies and specific proteins. An electronic nose, an ultrasonic probe, or almost anything else we have now could be linked to a smartphone and used to enhance its capabilities.

According to WHO data, around 422 million individuals worldwide were diagnosed with diabetes in 2014.
During the projected period 2017-2020, the global market for medical tricorders is expected to grow at a CAGR of roughly 6.7 percent, from USD 2.5 billion in 2016 to USD 5.4 billion in 2023. 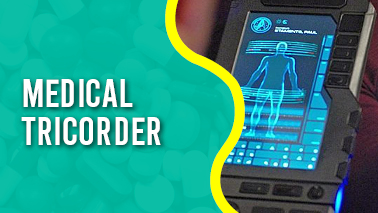